Without FEMA Help, City Unsure How to Fund Flooding Repairs

The city of Chamberlain, S.D., and the South Dakota Game, Fish and Parks (GF&P) Department remain in negotiations over how to proceed with about $150,000 in flood-damage repairs at American Creek Recreation Area in Chamberlain, The Daily Republic reported.

The campground is located along the Missouri River and was flooded from late June into August.

“I don’t know where the dollars are going to come from to restore the area,” said GF&P Director of Parks and Recreation Doug Hofer.

Hofer said he has been in discussions with Chamberlain Mayor Doug Nelson about where the funding should come from.

“They’re assessing what their capabilities are, and once we receive more info from the city, we’ll discuss to what degree we can help,” he said.

The Federal Emergency Management Agency (FEMA) recently decided it would not help fund repairs of state land along the Missouri River damaged in the flooding last spring and summer.

“We’re all disappointed that FEMA came to that decision,” Hofer said. 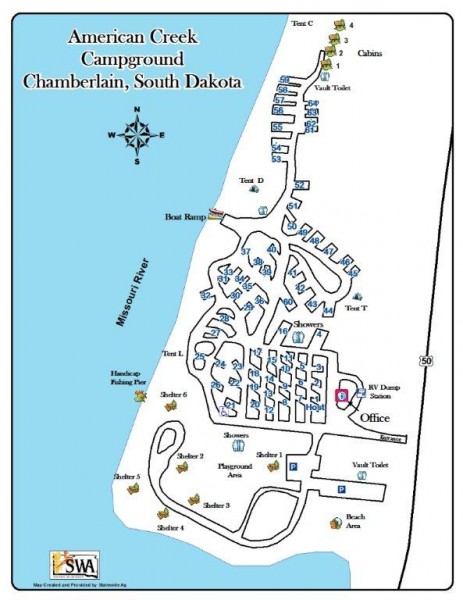 FEMA made the decision because the Army Corps of Engineers still holds the flood easement on the land, even though ownership has been transferred to the state.

GF&P owns the site but leases it to the city of Chamberlain, which in turn subleases it to a private manager who operates American Creek Campground on the land.

Chamberlain City Engineer Greg Powell said the majority of cleanup at the campground is finished and all the grass has been reseeded by the manager and city employees.

“I think we’re ahead of the game there,” Powell said.

Work repairing picnic shelters, shower houses and other electrical work is yet to be completed.

Powell said some of American Creek Campground’s shower houses had 7 feet of water in them during the flooding.

Despite the extent of the damage, he is confident the site will still be able to welcome campers this spring.

“The message we want to communicate to everyone is that, yes, we will be up and running,” he said. “Everything may not be as nice as it was before the flood, but we’ll have shower houses open and picnic shelters reconstructed.”

The flood damage at American Creek Recreation Area is far from an isolated incident.

Hofer said at one point more than 500 state campsites were out of service, but about 200 of those are already restored.

“We’re going to have the majority of our campsites back in operation,” he said. “That doesn’t mean all the scars and damages to the parks themselves will necessarily be corrected.”

GF&P won’t know until spring how many trees will need to be replaced from areas that had standing water last summer, he said.

Flood damage was so severe in some places that GF&P staff were basically starting from scratch when repairing landscaping at sites across South Dakota, Hofer said.

“In some cases, it could take up to two or three years to recover from this.”