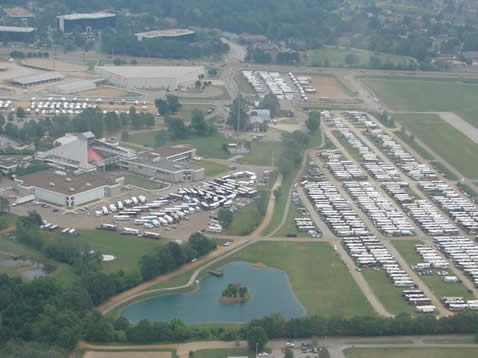 Aerial view of a past RV rally at the Agricenter RV Park in Memphis, Tenn. A camper was killed in a freak accident at the RV park on Wednesday.

A 72-year-old woman died trying to stop her recreational vehicle from rolling away at the Agricenter RV Park in Memphis, Tenn., Wednesday morning (Oct. 26), The Commercial Appeal reported.

Sharon Bailey was attempting to hitch her RV to the back of a truck at the site off Germantown Parkway with her husband when the camper began to move, said Shelby County Sheriff’s Office spokesman Chip Washington. Bailey ran to the front of the RV and tried to hop in the driver’s seat to hit the brakes.

The door to the camper flew open and hit her, said Washington. She fell to the ground and was crushed under the RV. She was pronounced dead on the scene.

The couple, married 51 years and from Spring, Texas, had been in Memphis since Sunday visiting Bailey’s sister, according to Washington. They were headed today to a festival in Alabama.