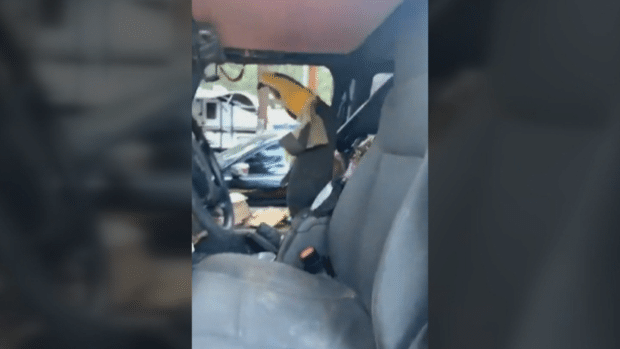 Paula Lea’s Jeep was destroyed by bears
A woman camping in the Colorado mountains woke up to find two bears surrounding her tent, according to CBS 4.

Paula Lea, also known as the “JeepnGypsy,” said she was camping in a tent at the Ouray Kampgrounds of America (KOA) in Ouray, when a mother bear and her cub approached.

“I woke up to heavy breathing by my head,” Lea said. “I sat up, looked out of the tent, and noticed a black bear jumping into the driver seat of my Jeep.”

Lea makes her living by traveling in her Jeep and documenting life in nature. She lives out of her Jeep, meaning one of the bears was entering the closest thing she has to a typical home.

“It was growling next to my head, it was the adolescent bear talking to the mom bear back-and-forth,” Lea said. “I immediately laid down and put the sleeping bag up, and covered my mouth, at the moment thinking I was hiding my breathing.”

Lea said she’s encountered bears and other wildlife before while exploring nature. However, she said this was the first time two bears had surrounded her campsite.

“I could hear fabric tearing, stuff being thrown out of my Jeep. My Jeep, the whole interior is completely destroyed,” Lea said.

Lea said she normally keeps bear spray with her while she sleeps. However, since she was sleeping in a heavily populated public camping location, she believed she didn’t need the spray that night.

“I let my guard down and left my bear spray inside the Jeep. So, I was unprotected in my tent,” Lea said.

Lea guessed the bears rummaged through her property for 45 minutes before fellow campers woke up and realized what was going on. Lea said she laid quietly the whole time, hoping not to spook the bears into physically harming her.

“(Nearby campers) were jumping up and down with flashlights, screaming and eventually scared the bears away,” Lea said.