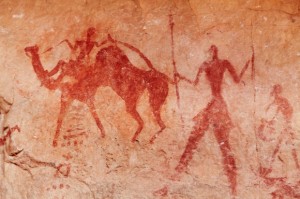 As I watch the camping season wind down toward Labor Day, I’ve been mulling over the strange impulse that made people want to be campers in the first place.

Why ever did they leave their comfortable, safe homes to go do battle with Nature, missing their favorite weekend sports on television?

Actually, I think it began as far back as the First Wapiti Cave Woman.

Yes, it’s true. (Or it could be. Truth sometimes is in the ear of the listener.)

The Cave Woman likely began to nag her husband (the first Wapiti Cave Man) with complaints like, “You never take me anywhere anymore.”

To preserve domestic tranquility, he probably sighed deeply, rolled up their bed of predator furs, filled a gourd or two with water, sharpened a couple of arrows, and dragged Cave Woman off by her ponytail to a nearby scenic lake for a couple of days of caveman R&R.

That likely became a common summer experience for the cave couple, so long as her head of hair held out. A change of scene was good for both of them.

But then, I believe, Cave Woman began to complain about conditions at the lake, such as rain getting their sleeping furs all wet and the presence of so many mosquitoes, not at all like back home in their safe, smoky cave.

So Cave Man likely took some strips of sinew and sewed a few tanned hides together, with a flap of hide for an entrance, and even sewed in a floor to keep rodents away. Voila, the tent was born.

That probably worked pretty well for a time, until Cave Woman began nagging that it was so much work to gather all their camping gear each time they went to the lake and then stuff it into heavy backpacks and trudge over hill and dale to get to their favorite campsite. (Besides, she was getting a terrible migraine from being dragged off by the ponytail every week or so.)

Since Cave Man had no knowledge of divorce (though that also could have been inspired by early-day camping trips), he likely snarled at Cave Woman and began thinking of ways to make camping easier for her. He was not too verbal, but also not totally without sensitivities.

He probably built a platform of small saplings, invented the wheel out of stone (Fred Flintstone wasn’t far off, there) affixed one round on each side of the platform, added two shaft poles in the front, and pulled the new camping rig to the lake. But since Cave Woman had to help push this early version of a trailer up hills, she soon wearied of all that convenience. Or so I speculate.

With a little bit more nagging, Cave Man or one of his descendants probably was goaded into inventing the internal combustion engine, one of which he built onto his Caveman Camper so it would be self-propelled.

Meanwhile, the Cave Man’s neighbors were no doubt watching all this progress and soon began copying the designs, building their own campers to shut up their own nagging wives. As they followed the original manufacturer down to the lake, they found that they enjoyed camping in a group, and thus all became the first Good Sam Club, most likely. 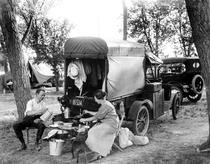 Further wifely nagging likely resulted in the invention of television, the VCR, generators, air conditioning, tow bars for family vehicles, chainsaws to cut up firewood, All-Terrain Vehicles to go to the other side of the lake more quickly, fermented brewski, and even the first chocolate bars, marshmallows and Graham crackers so they could have S’Mores around the campfire. These are all the things modern campers seem unable to live without.

Youza. And it all happened because of a nagging Wapiti wife who wanted to get out and get away from the cave every now and then.

So present-day wives everywhere can probably thank early Wapiti residents for their Winnebagos and their modern, cushy camping experiences. (Husbands everywhere, on the other hand, can cuss out that first Cave Man for giving in to his wife’s grumbling).

But the inventions didn’t end there. Once Cave Man got back home, he decided he needed to get away from his nagging wife, whom he had tried so hard to please.

So he went out back and began digging into a hillside, inventing – you guessed it – the first Man Cave.