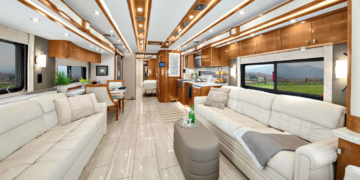 Diehard Auburn football fans Rick and Susan Turner hold season tickets on the 35-yard line at the university’s Jordan-Hare Stadium. But when the Tigers are on the field, the Turners are in the parking lot.

The Wall Street Journal reported that for every home game, the Birmingham, Ala., couple tailgates from their 45-foot 2016 Tiffin Zephyr, a luxury motorhome. The Zephyr offers an entertainment center and a full kitchen with solid-surface countertops and stainless-steel sink, as well as a range, microwave, dishwasher and refrigerator. And, unlike the stadium, there’s no line to use the Zephyr’s bathroom. Most important, electrical hookups and an automatic generator ensure that the motorhome is fully air-conditioned.

When the Turners hit the road — which is quite often — they travel with all the luxuries of a five-star hotel. In the world of motorhomes, Class A models that measure 40 to 45 feet are among the most lavish. New, fully loaded Class As off the lot start at about $250,000, and customized coaches can reach $3 million. Because of the price, Class A buyers are typically retirees or those nearing the end of their careers.

Turner, who paid about $525,000 for his Tiffin, retired once, but returned to the Portland, Ore.-based company at the request of the CEO. When he travels for work, he likes to take the RV, and his wife Susan, 63, and Labrador retriever Buddy typically come along for the ride. But they take plenty of personal trips to visit friends and extended family, as well as motoring to New Orleans for Mardi Gras and to the Florida Keys. In all, they put 10,000 to 15,000 miles on their motorhome each year.

Getting there isn’t cheap — most Class As get roughly eight miles per gallon in good conditions. “If you have to worry about MPGs, don’t get an RV,” Mr. Turner says. “You’re spending $300 to $400 every tank of gas. It’s a small mortgage for some people.”

Turner plans to retire full time in a few years. The couple — he was 15 and she was 13 when they started dating — hopes to spend six to eight months taking their RV up the West Coast from southern California, across the country to northern Maine, then down the East Coast back to Birmingham.