WSJ: RVing the Safest Way to Travel this Summer

By: Woodall's Campground Management|Published on: May 18, 2020|Categories: Industry News| 0 comments 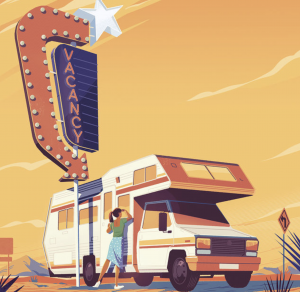 For R.T. Rybak and his wife, Megan O’Hara, of Minneapolis, the spring and summer calendar was packed with travel plans, according to the Wall Street Journal. They were all ready to fly to the Norwegian Arctic, then visit their children in the Bay Area, detour down to the Channel Islands near Santa Barbara and finally swing through Yosemite with the educational travel group Road Scholar — the last two spots ticking off numbers 16 and 17 on their bucket-list quest to visit all 62 of America’s national parks.

“When the pandemic hit, we had to cancel,” said Rybak, CEO of the Minneapolis Foundation, which supports civic initiatives in the city where he served 12 years as mayor. But as a spring of hunkering down wore on, he began searching for ways to travel confidently again once state and local authorities gave residents the green light.

His prime concern was safety. “[We] felt stuck because even if we were isolated in a car and brought our own food, we would still have the challenge of what to do in a hotel,” he said, a common sentiment among quarantiners yearning to be free. Only 14% of travelers feel safe taking a domestic flight, and 17% feel safe at a hotel or resort according to a late-April survey by MMGY Global for the U.S. Travel Association. The couple ultimately decided that when they can again venture into the world, they’ll do so in a nostalgic way they’d “never” considered: aboard an RV.

During his research, Rybak signed up with Outdoorsy, a peer-to-peer RV rental platform which is to RVs what Airbnb is to homes. He has his eye on a one-of-a-kind 1940s teardrop-style camper which was built on an Arizona Air Force Base and, according to its listing, “used to fetch hot air balloon baskets after flights.” It rents for $90 per night. A mere 12-feet long, the pale-green air-conditioned trailer still fits a full-size bed and a library in its cedar-lined interior. From beneath its rear hatch emerges a compact kitchen outfitted with a Coleman camp stove and an AeroPress coffee maker. To pull the thing, the RV’s owner will even rent you a 2019 Toyota Tacoma TRD Off Road pickup truck, outfitted with a roof tent, for an extra $155 per night.

Other American travelers, too, have decided that classic Airstreams and pop-top camper vans, Winnebago-style motor homes and even deluxe coaches are uniquely well suited to the current situation. Although Outdoorsy saw a quick spike in cancellations when stay-at-home orders and travel restrictions initially went into effect, said co-founder and CEO Jeff Cavins, daily bookings have since rebounded by 450%.

Jon Gray, the CEO of RVShare, a similar peer-to-peer platform boasting more than 100,000 recreational vehicles among its nationwide listings, has noticed that a lot of people don’t want to risk hopping on airplanes to get where they’re going: “We’re seeing our drive-to markets doing particularly well right now.” The site has seen a 650% rise in RV rental bookings since early April.

Not every RV has been snapped up. Michael Smalley, executive vice president of Cruise America, which has more than 4,500 vehicles across the U.S. and Canada, said his company was on pace to record all-time highs for rental days, rental revenue growth and sales of retired vehicles until COVID scared away inbound international RV travelers, which represent almost 40% of its annual rental business in North America.

But those cancellations have translated into availability and flexibility for the RV-curious. Jake Goble, a creative director and singer-songwriter in Venice, Calif., and his girlfriend, Krizia Vega, wanted to get a dose of nature and pay a visit to his mother, who lives in Shasta County, about 600 miles north of Los Angeles. For the trip, they rented a 20-foot long “compact” motor home from Cruise America, equipped with a refrigerator and stove, a queen-size bunk above the vehicle’s cab, a tank that holds 17 gallons of freshwater for cooking and showering and an additional 17-gallon tank for sewage. They decked out the utilitarian interior with tapestries, Mexican blankets, color-changing Philips Hue smart lights and a scented oil diffuser, as well as the season’s hottest accessories: disinfecting spray, masks and a big box of gloves. Cruise America RVs rent for an average of between $50 and $150 per night.