WWE 'Tribute to the Troops' Entourage Camped at KOA

The KOA Campground in Fayetteville, N.C., is hosting some special campers.

Six Prevost buses housing staff and professional wrestlers from the WWE arrived at the campground on Wednesday (Dec. 7) in preparation for WWE’s “Tribute to the Troops” scheduled for Sunday (Dec. 11) at Fort Bragg located 16 miles away.

The buses are camped at the entrance to the park, which underwent a major expansion last year. The campers pretty much keep to themselves, said Tom Dreyer, campground manager, adding, “I have no clue who they are.”

While he is unaware of his guests’ actual identities, there is no secret about who the performers will be. Grammy Award winning R&B sensation Mary J. Blige, comedian George Wallace, Extra’s Maria Menounos and Multi-platinum rock band Nickelback (whose song is used for the RAW theme) are all scheduled to appear in the four-hour-long show.

The special will also include messages of encouragement and thanks from various celebrities such as Matthew McConaughey, Hugh Jackman, The Muppets, Robin Williams, Bradley Cooper and Nicole Kidman among others. 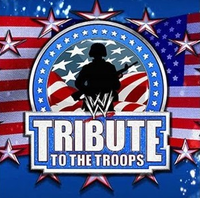 A 90-minute edited version of the entire performance will air on television on Dec. 14.

WWE Tribute to the Troops is an annual event held by WWE together with Armed Forces Entertainment in December as a way of honoring the men and women of the United States armed forces serving in Iraq and Afghanistan.

Music City Coaches in Nashville handles the transportation for WWE.

Dreyer said he had little warning of the special visitors. He saw the reservation Tuesday night and noticed that six Prevosts were scheduled to arrive. He got suspicious and quickly concluded it was someone important.

They are certainly a source of curiosity among his other campers.

The bus caravan will head to Fort Bragg on Saturday, Dreyer said.