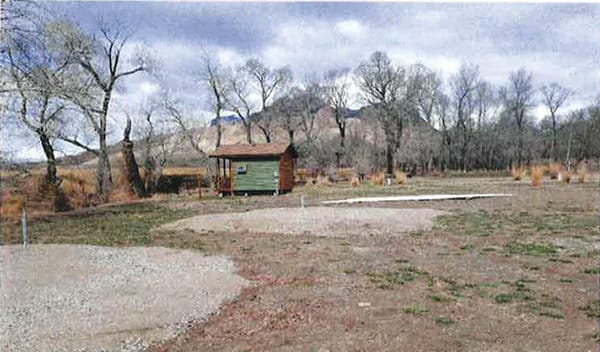 They also ordered the Wheels of Wonderment Motorcycle Campground to remove some dirt pads, electrical conduit and portable toilets it installed without county approval.

Pete Pleban, the campground’s owner, had not thought he needed the county’s permission — and he contended that the tepees he hopes to build alongside Trout Creek are not in danger of flooding.

However, Park County Planning and Zoning staff and a majority of commissioners were concerned about recent and historical evidence of water flowing through the area.

Commissioner Lee Livingston — who’s lived along Trout Creek — said rainstorms can quickly bring the creek out of its banks in the middle of the summer.

“If I was sleeping next to that creek bank in July and August, I’d be concerned about floodwaters coming down through there in the middle of the night,” he said, adding later, “Best case scenario, those sleeping bags get wet; worst case scenario, someone gets hurt or killed.”

Commissioner Joe Tilden said the county had to base the decision on the health and welfare of the people who are going to use the campgrounds “and that’s a real problem.”

On May 21, the commission voted 3-1 to deny a permit for the tepees, electrical conduit and a security fence within Trout Creek’s designated floodplain.

“I believe I was warrented [sic] a unjust, biased review by the Board of Commissioners and believe I am in full complaince of the laws set forth by Park County,” he wrote.

At the May hearing, Pleban told commissioners he has never seen the creek swell to the tepees’ levels in his four years living in the area.

“To me it’s a no brainer, what I’m doing,” he said, noting that only a small amount of dirt is being moved in the floodplain.