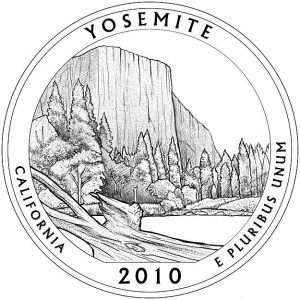 Illustration of one side of a new quarter to be minted this year, showing El Capitan in California's Yosemite National Park. Drawing courtesy of the San Francisco Chronicle.

One side of a new batch of quarters scheduled for release this year will sport the image of towering El Capitan in Yosemite National Park, according to the San Francisco Chronicle.

The new design is one of five that will be unveiled by the U.S. Mint today in a ceremony at the Newseum in Washington, D.C., touting the America the Beautiful Quarters Program, which will honor 56 national parks between now and 2021.

The Yosemite coin, which will be released into circulation in July, will be the third coin in the series following Hot Springs National Park in Arkansas, and Yellowstone National Park in Wyoming.

The program “allows Americans an opportunity to carry a small piece of American heritage in their pockets,” said Mint Director Ed Moy. “Yosemite National Park and the other four sites represent a selection of America’s finest public lands, which all Americans should explore for themselves.”

The drawing on the back of the quarter will show the spectacular 3,000-foot face of El Capitan, the tallest granite cliff and one of the most popular rock climbing spots in the world. The inscription will read Yosemite, California, 2010, E Pluribus Unum.

The 1,200-square-mile park, set aside by President Abraham Lincoln in 1864, was chosen by a panel of experts as California’s representative. Every state, the District of Columbia, the Commonwealth of Puerto Rico, Guam, American Samoa, the U.S. Virgin Islands and the Commonwealth of the Northern Mariana Islands will be represented on a coin over the next 11 years, Moy said.