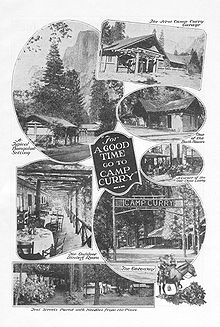 The superintendent of California’s Yosemite National Park wants input on what to do with 233 historic cabins that are off limits to visitors because the towering cliffs rising above them are known to dump tons of granite without warning, according to the Associated Press.

National Park Service managers are trying to figure out a plan for the historic buildings of Curry Village in Yosemite Valley — some more than a century old — before they succumb to the elements, vandals and nesting animals.

The cabins have been frozen in time behind a chain-link fence since October 2008, when the equivalent of 570 dump truck of rock hit 17 cabins where youngsters on a field trip were staying. Nobody was seriously injured.

An Associated Press investigation found then that park officials had known about the potential danger for years. Park officials quickly declared one-third of the popular family campground beneath Glacier Point a “rock fall hazard zone” and fenced it off.

Since then, the neat rows of wooden and canvas cabins, including one that in 1899 was the home of Curry Village’s founder, have been awaiting their fate.

“We want to determine what’s worth moving because it has a historical component to it,” said park spokesman Scott Gediman.

Park officials are asking the public for suggestions as they begin an environmental assessment that could lead to some buildings being moved and saved, and others dismantled to eliminate what has become an “attractive nuisance” to curious visitors.

“We want the public to help us look at this thing from all of the angles,” Gediman said.

One possibility is dismantling the cabin known as Mother Curry’s Bungalow and moving it to a collection of historic buildings near the Wawona Hotel on the park’s south end. Some buildings could be demolished and others moved out of the danger area after the agency finishes the study, which is required by the National Historic Preservation Act.

The process is tedious compared with the loss of nearly 300 tent cabins during the floods of 1997. Those were not historic so park officials demolished them.

Since 1857, at least 535 rockfalls in Yosemite Valley have killed 14 people and injured 62, more than at any other national park. Yosemite Valley is easily the most collapse-prone place in a park that receives over 3 million visitors a year.

The superintendent will be accepting public comment through April 7.