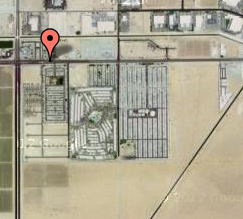 This aerial view, courtesy of Google, shows the proximity of the Miles Last Resort RV Park in Yuma, Ariz.,to a drainage canal which diagonally near the park

The owners of a Yuma, Ariz., business are raising a stink over the canal muck being dumped on the edge of their property by the Yuma Mesa Irrigation and Drainage District.

Mark Miles, who operates Miles Last Resort RV Park, 5590 E. 32nd St., along with his parents, is outraged because the muck pulled out of the bottom of the canal behind his property has been dumped into a trench in close proximity to his tenants’ RVs and trailers, the Yuma Sun reported.

The issue came to a boiling point last week when Miles observed a machine scraping the organic sludge out of the bottom of the canal and then dumping it into a trench alongside the canal during a procedure known as “dipping.”

“We found basically a sewage dump,” he said. “We found organic waste had been dumped on our property. No one wants to live in a sewage dump. This is a residential area.”

The smelly sludge had even splashed onto a tenant’s RV, which then had to be cleaned up by hand, Miles added. “This organization somehow thinks they have the right to treat our property as a dump.”

The Miles family has filed a report about the incident with the Yuma Police Department and has been in contact with government agencies to test samples of the muck to see if it is a biohazard.

The canal runs along an easement which allows the Yuma Mesa Irrigation and Drainage District to conduct routine maintenance.

“What we’ve done is cut a trench down there, which we do most everywhere, so that when we dip the canal we have a place to place the mud because it is real runny, and you can’t control it if it is put onto flat ground,” said Patrick Morgan, manager of the Yuma Mesa Irrigation and Drainage District.

The canal is dipped on a regular schedule to allow the water to flow more easily on its way to irrigate crops in the area. “If you leave it in there, it will start growing moss and it will restrict the flow,” Morgan said.

Morgan is aware of the concerns brought forth by the Miles family. “I know it does have an odor to it. It’s not as bad as what they make it out to be and it doesn’t last for very long.”

No other property owners in the area have approached him with similar concerns, he added.

“This surely isn’t the first time we’ve had to deal with them. We have people all along there, and they are the only ones that seem to be so upset about it.”

Morgan will, however, speak with the employees who dip that area of the canal to see if there are any alternatives. “I am going to talk them about the methods they are using when they dip the canal down there and hopefully that will resolve the issue.”

He will also work with the Miles family to resolve the issue, he added.

“We are going to take a look at that. This is no fun for us and no fun for them, and if there is something else we can do then we will try. But if you end up with trailer parks on both sides of your canals, then somebody’s going to get the mud. It has to be taken out of the canal.”