‘Yurts Having a Moment’ Amid a Surge in Glamping 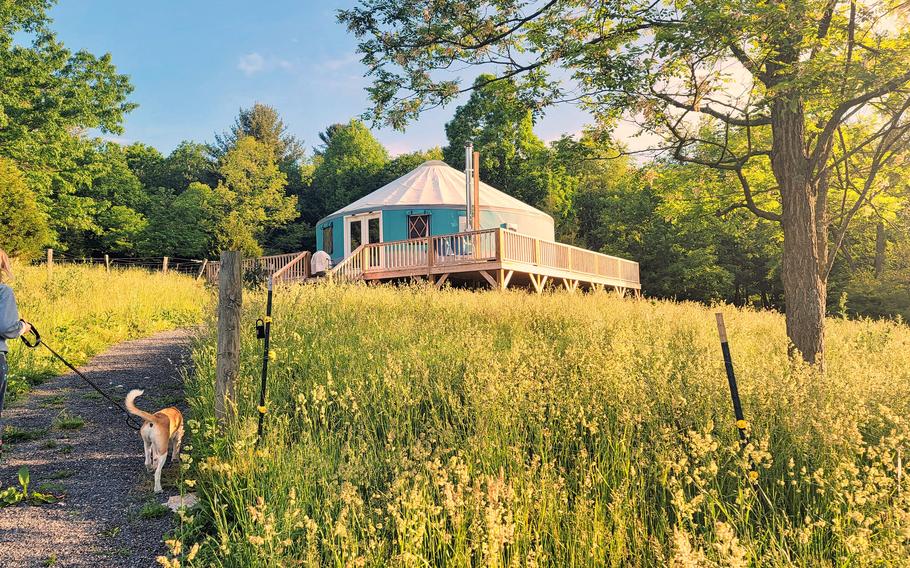 Yurts date from thousands of years ago but are now part of the glamping trend. Russell Prechtl and his husband, Craig Freeman, built Solar Solitude last year and started renting out the West Virginia property in March. (Christian Arriola/The Washington Post)

Editor’s note: This story was written by Andrea Sachs for Stars and Stripes.

On a spring afternoon deep in West Virginia, Frankie ran around and around and around the deck of Solar Solitude, a rental yurt. To the uninformed observer, the Puerto Rican rescue dog, a guest at the property, was chasing an imaginary squirrel. But I knew better. Frankie was embracing one of the hallmark traits of the yurt: its roundness.

The pandemic has pushed us outdoors, but when it’s time to come in, we don’t want the same old four walls. Unusual lodgings have become commonplace, and few more than the yurt. The Airbnb Report on Travel & Living, which the company released in May, noted a 31% increase in the number of unique accommodations since 2019; the collection now exceeds 170,000 listings. Demand has risen with supply: According to the study, searches for rentals in this category has grown 94%, and interest in yurts has surged by about 1,700% — more than earthhouses, barns and tiny homes.

Campspot has noticed a similar upswing. The booking site for outdoorsy stays features more than 100 yurts in a variety of settings, such as a gnome-themed campground in Pennsylvania and the grounds of a reproduction fort along Colorado’s South Platte River. Over the past year, the company noted a 13% higher occupancy rate for yurts than for other types of accommodations at vacation spots with mixed lodging styles.

“Yurts are having their moment. They have that cool factor,” said Dana “the Yurt Girl” Hendel Morgan, a design and sales consultant with Seattle-based Rainier Outdoor, which builds the structures. “It’s just blown up, especially with glamping on the rise.”

Ah, yes, glamping, where “roughing it” means having to flick the bug off your duvet cover or throw another Duraflame log on the fire. The muffin-top-shaped dwellings are part of this trend, which is still going strong more than a decade after landing on our shores from Europe. Last year, 4.8 million households with first-time campers tried glamping, up from 1.3 million in 2019, according to Kampgrounds of America’s 2021 North American Camping Report. Travelers are clearly seeking nature-centric escapes that feel more like a snug cashmere throw than a scratchy wool camping blanket.

“Yurts remind me of being a kid again,” said Colin Sternagel, who lived in Mongolia for seven months before founding SunTime Yurts, which imports the shelters from the Central Asian country. “They are like the ultimate fort made of blankets and have the coziness of a [Volkswagen] Westfalia, but are better insulated.”

Much like tents and cabins, yurts weren’t — and still aren’t — always cushy affairs. The felt-and-wood homes originated in Mongolia several thousand years ago as mobile lodging for nomadic herders living and working on the Gobi Desert steppes. Mongolian ruler Genghis Khan used gers, the local word for the structure, on his military campaigns. The yurt’s main selling points are its portability, durability and quick assembly. Paula Sabloff, a political anthropologist who curated the traveling exhibit, “Modern Mongolia: Reclaiming Genghis Khan,” said a Mongolian family can break down and erect a yurt in less than an hour. (By comparison, Solar Solitude took five months to build. Blame the contractor.)

“A friend once said that one is not a true Mongolian man if he cannot assemble a yurt,” Sabloff said. “He was, of course, Mongolian.”

The yurt’s simple structure belies its sophisticated engineering. The latticework walls, door frame, rafters and center ring all work together to create compression, tension and balance. The canvas or vinyl cover helps keep the yurt warm, cool or dry, depending on the weather. Of course, you would never know the genius from a passing glance. When I first drove up the long gravel driveway to Solar Solitude, I wondered if I had booked a circus tent or, based on its color, Papa Smurf’s mushroom house.