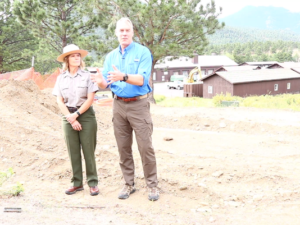 On a bright morning at Colorado’s Rocky Mountain National Park (RMNP), Secretary of the Interior Ryan Zinke gathered with park officials at the construction site of a water pipeline that will feed into the Beaver Meadows Visitor Center upon completion, according to the Coloradoan.

“This is one of the many examples of infrastructure that people just don’t think about when they go through the front gate,” Zinke said.

Zinke and his administration hope to bring awareness to the need for maintenance and upkeep that often get delayed on federal lands.

“Our parks, as many of you may know, are $11.7 billion behind in infrastructure, most of that roads,” Zinke said. “It’s not a Republican or a Democrat issue, it’s an American issue.”

The need to address construction projects like the water pipeline is just one of many infrastructure related issues the Department of the Interior hopes to tackle with the help of Congress.

Zinke hopes for a yes vote on bipartisan legislature to fund projects like these at national parks at RMNP and beyond. Zinke said he hopes to see The Restore Our Parks Act, a bipartisan bill that recently dropped in the Senate pass.

RMNP currently has more than $84 million in deferred maintenance, according to a National Park Service report. It’s a topic that Darla Sidles, the park’s superintendent, was able to further contextualize during Zinke’s visit.

“We are now the fourth most visited national park in the country with 4.4 million visitors last year,” Sidles said. “That has influenced some of the wear and tear of these park facilities.”

RMNP issues do not exist in a vacuum. There have been a number of proposals on ways to deal with the massive amount of maintenance being put off on public lands.

“We didn’t get $11.7 billion behind overnight, this has been multiple administrations, so how do we do it going forward,” Zinke said.