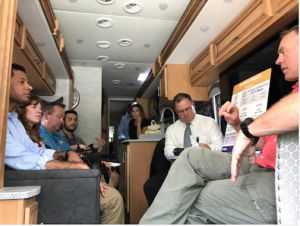 Forging public-private partnerships is the key to accelerating the modernization of America’s outdated, Eisenhower-era national parks with the end result being “a better parks experience all Americans could enjoy for the next 100 years,” U.S. Interior Sec. Ryan Zinke said repeatedly during a day-long event Tuesday (July 18) in Washington, D.C., as part of the Trump Administration’s “Made in America” week.

The day began with Zinke meeting with members of the Outdoor Recreation Industry Roundtable (ORIR). Following that, he toured U.S.-made RVs, boats, ATVs, snowmobiles and off-road vehicles staged outside the Department of Interior headquarters. The day culminated with an hour-long excursion with Zinke hosting RVBUSINESS.com and a handful of other media in a 2018 Newmar Canyon Star 3923 that went from the U.S. Department of Interior headquarters to nearby Theodore Roosevelt Island, a memorial park on the Potomac River.

A former U.S. Navy Seal and freshman congressman from Montana, Zinke touched on a variety of subjects during the police-escorted trip, including: bureaucractic positions will be shifted from Washington to out into the field; the familiar wool park rangers uniforms will soon be made out of more comfortable materials; cleanliness of national park bathrooms will be a priority. But his primary message focused on leveraging public-private partnerships in order to improve visitor experiences on public lands and waters, while also helping to reduce the department’s maintenance backlog.

Toward that end, Zinke announced his intention to create a new advisory committee that will focus on expanding public-private partnerships on America’s public lands.

“In this room, in your experience from the industry side, you may know that the government sometimes isn’t the cutting edge of innovation. But you are. On the government side, what we have to do is public-private partnerships to leverage that innovation,” Zinke told the dozen or so ORIR members, including Recreation Vehicle Industry Association (RVIA) President Frank Hugelmeyer and Recreation Vehicle Dealers Association (RVDA) President Phil Ingrassia.

“This was one of the best meetings that I’ve attended with the government agencies in 20 years that I’ve been with RVDA and in the industry,” Ingrassia told RVBUSINESS.com. “They (government officials) just had a great attitude in listening to what the industry has to say about some of the barriers that we face — not only with access, but with getting infrastructure to support RV travelers where it needs to be.

“We’re going to be hearing a lot more about this,” Ingrassia continued. “And we’re going to need the industry to help the associations to put the shoulder to the wheel to advance these programs, because public lands and campgrounds are a key part of the overall RV environment. So they’ve got to be brought up, as the secretary said, to a five-star level.”

“A record number of Americans are buying RVs, nearly all of whom plan to use the RVs to go camping,” said Hugelmeyer. “What outdoor recreation leaders presented to Secretary Zinke today are specific ways the National Park Service can take a commonsense, multi-agency approach to modernize our recreation infrastructure and better serve the diverse and rapidly growing pool of visitors.”

It should be noted that Zinke is no stranger to the RV lifestyle. During his 2014 congressional campaign, he crisscrossed Montana putting 18,000 miles on a 2004 Newmar Kountry Star. He told RVBUSINESS.com the campaign meant 18-hour days, but he would also try to park the motorhome next to a creek so at morning’s first light he could set a fly in the water right from the RV door.

He’s eager to resume RVing once his stint with the Interior is complete, he said, but until then there’s work to be done.

“Last year we had 330 million visitors to our parks system, and there’s no indication that next year — or this year when we get the numbers — it’s not going to be greater. I believe it will be,” Zinke said. “Looking out in long term, the pressures on our public lands are going to continue to grow as is our need to update, expand, and look at how we preserve and protect our recreational experience. Recreation is becoming a bigger slice of our public lands use, and we expect that trend to continue.

“But some of it is answering the question, how do we recreate? If you go to Glacier National Park, a park that I’m intimately familiar with, and Yellowstone, a lot of our infrastructure is still set in the ‘50s — in some cases a little bit before. And so it’s difficult to camp and enjoy when the facilities are designed for somewhat of a different era.”

What follows is an edited Q&A compiled from the day’s conversations with Zinke.

WCM: This morning we saw several RVs, boats and other outdoor recreation vehicles, all of which were manufactured here in the U.S., as part of the Trump Administration’s “Made in America” promotion. Earlier, though, you were mentioning that this campaign is about more than manufactured goods, at least as far as you’re concerned.

There is $39 billion a year of economic activity generated at parks. Overall, $889 billion a year is what Americans spend on the recreation experience. Public lands are a part of that and we want to make sure we do it right.

That’s the American legacy that Roosevelt gave us. We want to make sure that 100 years from now, looking back, that the legacy of Roosevelt still stands strong.

Zinke: We have one today. If you go in our parks, usually the lodging is managed by a public-private partnership. (Vendors) manage the food dispensary, the rangers aren’t making hot dogs. A lot of our boat concessionaires, going out to Alcatraz, going out to our Statue of Liberty, are done through a public-private partnership. What we’re looking at is providing some stability, longer-term contracts so they can invest in things like improving our campgrounds.

It’s a great experience, but a lot of them are from the Eisenhower era. They weren’t made for RVs that have slideouts. They were really made for your station wagon, with a popup or a tent. We have to adjust how Americans enjoy their outdoor experience today. A lot of it is just what we see here. It’s towed vehicles, it’s RVs, it’s air conditioning, it’s Wi-Fi.

The young kids, a lot of them don’t want to go to our parks, because, “Well, I can’t be on the Wi-Fi and send pictures to my friends.” So we’re going to adapt to what America wants and that is moving to make sure the recreation experience is enhanced and sustained.

WCM: Is there a realistic timetable for these upgrades?

Zinke: Of the 27 items that were proposed (by members of the ORIR), our head of our parks service said we’re going to get to “yes.” That is a distinct difference in attitude, and I guess it boils down to this: I work for you. This is a new experience; the Department of Interior works for the people. The people don’t work for the Department of Interior. That means our citizens deserve the best parks experience, the best recreational experience, the best utilization of our public lands, and that’s what we’re going to deliver.

WCM: Could you address your critics and, as we saw today, their claim that public land is for sale to oil and big industry?

Recreation today has a slice, but tomorrow that slice will be bigger because people are using our public lands more. The pressures on our public lands are increasing, so we have to look out 100 years — as Roosevelt did, a little more than 100 years ago today — to make sure that what we are doing today what is in the best interest of our public lands tomorrow and in the future.

I’m not an advocate for selling or transferring public lands. But I’m an advocate of making sure public land is protected and used, and that’s a lot of infrastructure.

WCM: So what is your vision of what a national parks campground will look like after the improvements that you envision?

Zinke: I grew up right next to Glacier National Park. I remember camping with my family, but the camping that I did when I was growing up was a station wagon and a tent. For a lot of Americans, they no longer do that. They use RVs or campers. They demand running water, Wi-Fi. So, part of my job as a steward is to adapt what the need is and the requirement of the new generation, and sometimes their RVs have slideouts. So, our campgrounds need to be reconfigured.

We have treasures in the U.S. It’s important to share the treasures, but it’s also important to look at our young people coming up and make sure they’re tied to that park experience.

I’m here today with great park employees. I want our young kids to look at our superintendents and go, “You know what? I want to be them. Their job is so good, being out where I want to be. I want to be them.” And that’s what we have to do, as the Department of Interior, is to shape the future.

WCM: It struck me that this motorhome would have difficulty getting into a campground in a national park.

Zinke: It could go into some of the parking lots; that’s about it. In Glacier National Park, you couldn’t get this past Apgar Campground. I’m not even sure you could get into McDonald Lake parking lot.

WCM: So when you’re talking the infrastructure improvements to national parks, would at least part of it to be able to get 40-foot-plus RVs into the campgrounds?

Zinke: Yeah, and I think you’ve got to look at it case by case — look at the size of the park, the volume, whether it’s worth the investment.

That’s really where the public/private partnership can offer the most opportunity because your industry knows more than we do about where the demand is, what the customers want, where we should be in a position of being a partner with you and evaluating together and then figuring out the best approach forward.

Certainly there are parks where existing campgrounds can and should be improved to handle your RV, an RV with slideouts. Probably the first step is to hit your largest volume where your payback is greater, and then the number of slots (campsites) should reflect the number of outlines (demand), right?

WCM: I realize this is out of your jurisdiction, so to speak, but do private campgrounds play a role in any of what we’re talking about?

Zinke: Yeah, they do. Do we compete with them? No, because we’re not going to build out to where we’re over-capacity to where the private guy gets hurt.

We don’t want to build out where there’s no opportunity for businesses that have already invested in the gateway communities. We want to make sure we work together and everyone wins. Our pricing structure should be that way.

People could not travel in RVs without the private RV sites. There are whole industries, set up like huge car dealerships, and they’ve been a huge source of experience and revenue for us because people will come, towing a vehicle and then detach and go in the park. I think that’s great.