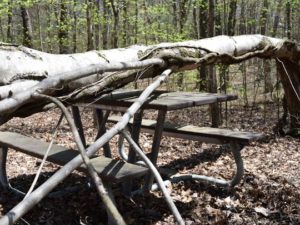 A fallen tree rests on a picnic table at the closed Look Rock Campground at the Great Smoky Mountains National Park.

“What we have here is an example of not prioritizing what we love,” said Zinke of national park funding. In the 2017 fiscal year, NPS received only $2.9 million in annual appropriations, well short of the nearly $12 billion sum needed to address total deferred maintenance needs.

The bill, which has support from several key Democratic lawmakers as well as the Trump administration, would provide mandatory funding for NPS maintenance needs by allocating 50% of onshore and offshore revenues from energy production on federal lands.

The pair also announced their intention to appropriate $2 million in funds from the U.S. Department of the Interior in order to reopen the Smoky’s Look Rock campground. Located near the terminus of Foothills Parkway West, Look Rock Campground was closed in 2013 due to the park’s lack of funding to fix the site’s broken pipe system and other amenities.

“I’ll kick the cans and look underneath the rocks and find the appropriate funding to the prioritize this (Look Rock Campground),” said Zinke.

Clay Jordan, deputy superintendent for Great Smoky Mountains National Park, said he was unable to provide a timetable as to when the park would reopen to the public.