Owners, Both Victims of Fires, Give Insurance Advice 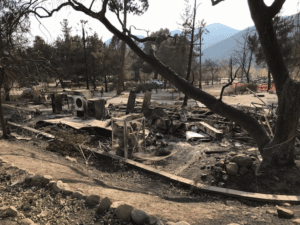 The Ventura Ranch KOA suffered severe damage during the Thomas Fire in 2017.

Park operators often expect that their insurance will cover most, if not all, of their losses in the event of a disaster.

But operators at two campgrounds that suffered catastrophic fires during the past two years tell WOODALLSCM.com (WCM) they have learned some tough lessons, not only about the limitations of campground insurance policies, but about the things they need to do differently moving forward.

Scott Cory, who owns and operates the Ventura Ranch Kampgrounds of America (KOA) Holiday in Santa Paula, Calif., never dreamed his park would go up in flames. But that’s exactly what happened when the infamous Thomas Fire raced through the mountains of Ventura and Santa Barbara counties in early December 2017.

The Ventura Ranch KOA was mostly destroyed by the blaze, which was started by power lines coming into contact with each other during a high wind event.

“It destroyed 22 structures, including 80% of our park model RVs,” Cory said. “It destroyed our tipis and safari tents. The temperatures were about 1,800 degrees and in the laundry room, not only was everything melted, but even the coins melted together, like a blob.”

Even the water spigots throughout the park were melted, he added.

But while Cory’s structures were covered by his property insurance, he learned after the fire there was one important part of his campground that was not covered: his water, sewer and electrical utility connections, including the connections for each campsite.

Cory added that the utility connections, typically the most expensive part of a campground, are not covered by any insurance policy available to campground operators.

The only time when campsite utility connections damaged by fire are covered by insurance is when a building code upgrade is required for the utilities that were burned. In Cory’s case, that only involved a handful of campsites in the oldest section of his campground, since most of Cory’s campsites had been installed after 2010.

Cory anticipates that it will cost more than $250,000 to replace his campsite utility connections.

“The (campground) industry needs to raise this issue with the insurance companies,” Cory said.

Cory was also upset to learn that the property coverage he had on his park model RVs would not cover the cost of replacing them if they were destroyed by fire.

As things turned out, Cory said he paid about $40,000 for each of his park model RVs, and he was insured for that amount, but by the time the Thomas Fire swept through his campground, the cost of replacing each unit was closer to $70,000. 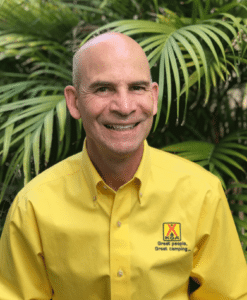 “I figured I had replacement insurance,” he said.

“My words of wisdom would be to not rely on the business loss insurance that is standard in the package that you buy,” he explained. “You need to buy extra coverage. The extra coverage I bought ended up being my safety net. If I hadn’t increased it, I would not have been able to reopen. I was lucky that I had that coverage. It covered me so that I could continue operations and get back in business.”

When WCM interviewed Cory in July he was busy replacing landscaping around the park. The fire also destroyed the park’s sycamore, oak and pine trees.

“We’ve already replaced more than 500 trees and shrubs,” said Cory, who reopened 50% of the park within nine months of the fire and should have 90% of the repairs completed by the second anniversary of the Thomas Fire.

But while the repairs are continuing, Cory is still waiting for Southern California Edison to install a power transformer, which provides power for the office and registration building that are in the final phase of construction.

“We are operating out of a 350-square-foot temporary office building,” he said, adding that he expects to finish the repairs to his park, with the exception of the zip lines, by the first quarter of 2020.

The fire broke out inside the unoccupied 1,700-square-foot double-wide modular home belonging to Gary Quigley, the second-generation co-owner and operator of the park, who lives onsite with his wife and son. The cause of the fire has not been determined, but firefighters suspect it may have been caused by an electrical problem.

“It was the Friday night of Memorial Day weekend,” Quigley recalled. “We’re all at work at the park. There are 800 people here, and all of the sudden I get a call from one of my staff members. ‘You have to get to your house as soon as you can.’ I could hear panic in his voice. Instantly, I was in a panic, too.”

Right away, Quigley wondered if his house was on fire. But how? 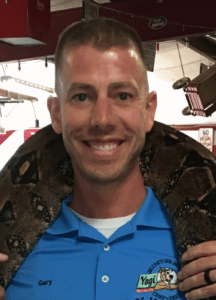 By the time Quigley got to his home it was engulfed in flames.

“The house was already so hot, there was no chance of going in,” he recalled. “I thought, ‘Oh my gosh. I’m about to lose my home and everything in it.’”

Fortunately, Quigley said, he had two things going for him that kept the fire from making the national news.

For starters, when he ordered the modular home in 2013, he had it built with fire resistant drywall, so his home burned more slowly than would otherwise have been the case.

“If we did not have that fire-resistant drywall, the fire would have spread to the office building next door, and behind that was a 500-gallon propane tank, and then the campers,” Quigley said. “There could have literally been a massive loss of life. It could have been catastrophic if it went beyond my home.”

There also happened to be several volunteer firefighters staying at the campground that weekend and they immediately sprang into action, turning off power to the home and advising Quigley and others not to try to open its doors or windows because that would let more fresh air into the structure, accelerating the blaze.

They also did what they could to help contain the blaze while they waited 20 to 25 minutes for firefighters to arrive at the park’s remote location.

“The volunteer firefighters probably saved the business and probably prevented massive casualties,” Quigley said. “I didn’t lose my life and neither did any of my campers.”

Quigley, whose wife is expecting to give birth to another child in December, said they temporarily moved in with his parents, who also live at the campground, while they wait for their insurance company to fully compensate them for their losses.

“Open every drawer, everything in your home or business. Take pictures and video of all of your contents and do it on a quarterly basis,” Quigley said, adding, “The insurance company wants a list of what you own.”

Quigley said making a careful inventory is important to do before a fire takes place.

“When (a fire) happens, you are so mentally paralyzed,” he explained. “The idea of trying to remember what you had in every cupboard, you’re never going to do it.”

While the Quigley household was destroyed by fire, luckily the campground was not impacted.

The home was adequately covered by insurance, according to Quigley.

However, they did not have sufficient insurance coverage for the contents of their home, including their furniture, home furnishings and many other items, all of which are covered under a separate policy.

The Quigleys had $45,000 in internal contents coverage, but actually needed more than twice that amount of coverage.

“I thought we had two or three times the content coverage we actually had. Somehow, we overlooked that detail,” Quigley said. “I don’t know if I looked at it too quickly. It was one of those line items you don’t give a lot of thought to. Ninety-eight out of 100 people I ask say they have no idea what they have in terms of content coverage.”

Quigley also recommends that park operators spend more time with their insurance agents to make sure they truly understand what’s covered and what’s not and whether they need to increase their insurance coverage.

“Get your agent out to your property and have them walk the park and go through the different types of losses you could experience fire, tornadoes, lightning strikes,” he explained. “Have them go through line by line and explain how you’re covered.”